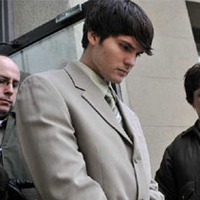 Cuadra only managed to escape the death penalty when the jury was unable to agree on his sentence.

For the appeal Cuadra is citing duress behind his role in the murder. He is claiming to have been controlled by Kerekes, who was a bully and an abuser. He faulted his trial lawyers, Paul Walker and Joseph D’Andrea, for failing to raise the issue for the jury.

An earlier appeal was upheld by the state Superior Court in October 2010.

A new book on the murder is due out at the end of May. Cobra Killer, by Peter A. Conway and Andrew E. Stoner, will explore the murder and subsequent trial in more detail.

The timing of the appeal and the book's pending release are purely coincidental we're sure. But perhaps Cuadra will get a free copy of the book for helping generate a little publicity.